Ochre is the oldest form of paint used in Australia

If the walls of these ancient quarries could talk, they would probably tell of superhuman feats of endurance by those who mined them with nothing more than their hands and primitive digging sticks to extract their treasures and then cross the country on foot, as far back as 30,000 years ago carrying pieces of their priceless bounty.  Yes, it seems, highly prized ochre, mined in a number of different sites across Australia by early Australian Aborigines, could well represent the world’s first miners (long before the legendary King Solomon’s gold mines and other more well known early mining operations around the world) in one of humanities earliest known trading systems.

Used for a variety of ceremonial body painting, art work, medicines and many other purposes, the various types of ochre extracted from different deposits across the country were widely sought after and remarkably, it seems, ochres of different colours and textures and qualities, were carried and traded across thousands of kilometres of inland Australia.

With known fine quality deposits spread as far apart as Arnhemland in the Northern Territory, west to Wilgie Mia in the Murchison region of Western Australia, to Red Hill in southeastern Australia, the Western MacDonnell Ranges in Central Australia as well as Lyndhurst and the Flinders Ranges in South Australia, the trading of different types and qualities of ochre (which varies quite considerably) between such far flung sites thousands of years ago is truly remarkable.

Such feats of courage and endurance (all on foot) are in fact, almost impossible to imagine at a time when there were no roads, maps, transport and would have involved unbelievable hardships in an unforgiving country … all for a bundle (perhaps around 5 kg) of ochre. To protect their valuable cargo during travel, ochre for trading was often dampened and either pressed into bricks or rolled into balls.  This action sets the ochre in quite hard lumps for easier transportation.

But despite the extreme challenges involved in such a trade, the use and variety of ochres in far apart tribal locations across the country was surprisingly common. When trading did occur, pituri, or bush tobacco, was a common exchange item as well as boomerangs, spears, flints, stone axe heads, down feathers used in ceremonies, some bush foods and other coloured ochres. It is known that quite commonly trading parties of 70 or 80 men (with reports of even up to 300 at certain times) would travel many hundreds of kilometres (usually following known water sources) in these extensive trading expeditions. Women did not participate in these trading journeys.

Today, much of this tradition has been lost, but for the modern day traveller it is possible to call into several different ochre sites where we can stand and try to imagine what the scene would have been like here in these ancient mines all those years ago. Most ochre sites around the country continue to have quite significant importance to the local Aboriginal people in the area.

During our recent inland travels, we called into three of Australia’s remote ochre sites where we found each had its quite different atmosphere and appeal.

Ochre Cliffs – 5 km north of Lyndhurst in South Australia. The main, well-used ochre diggings here are quite extensive, spread over an area of around 1 square kilometre but the deposit of ochre in this district is, in fact, known to extend over an area many times that which has been mined. The rich seams or bands of cream, yellow and red ochre line the cliff walls of the quarry and are particularly colourful when seen just after sunrise and just before sunset when the strong, warm colours in the cliffs seem to almost glow in rich lighting found at that time of day.

Visitors to this site are requested not to climb down the fragile cliffs here into the main ochre pit.

The Ochre Pits – off Namatjira Drive, west of Alice Springs in Central Australia. The colourful curves and swirls of these soft stoned and quite fragile cliffs have played an important role in the culture of the local Western Arrernte Aboriginal people for thousands of years. These Central Australian ochre cliffs are set in the foothills of the majestic Western MacDonnell Ranges.

In geological terms these pits date back to a time when the Ranges here were, in fact, part of the floor of a massive inland sea.  The different colours in these cliffs represent layers of mudstone and siltstone, once horizontal, but steadily heaved into their present near vertical position when the MacDonnell Ranges were formed by geological upheaval over 300 million years ago. Over the years the wind and rain has continued to carve into the soft layers here revealing the colourful swirls and dramatic designs embodied in the quite majestic 10 metre cliffs found at this colourful and special site today.

Wilgie Mia Ochre Pit – located approximately 70 km northwest of Cue in the Murchison district of Western Australia. Here in the top of a small hill, a large hole (with many side tunnels) has been dug out forming a cavern from which it is estimated some 50,000 tonnes of ochre was mined by early Aborigines. The hillside here from the outside resembles a hollow-shell Easter egg with the top broken open.

The intensely deep red coloured ochre from this hillside, with its silvery sheen, is believed to have been the most prized ochre of all, with studies finding it had been traded and transported to far flung destinations such as Cape York, the Kimberley and to desert tribes on the Nullarbor.

In the period from 1965 to 1972 commercial mining of this rich ochre deposit also took place here.  This activity was brought to a close in 1972 when the site was declared an Aboriginal reserve and protected area.  A fence has been erected around the cavern entry.

In many ancient Aboriginal tribes/communities around the country, ochre was used almost daily. It was central to the preparation of many medicines and is still quite widely used in religious ceremonies, for beauty, to display grief and for general body decoration. In short, it has long been seen as an essential ‘household’ item!

White and yellow ochre was used mainly for decoration or cosmetic purposes. Mixed with water or animal fat, such as from a goanna, possum or emu, it was made into a paste and smeared on the body with a finger or feather. Ash and charcoal are also commonly used for body decoration.

Red ochre (such as that found at Wilgie Mia) is the most powerful and symbolic of all the ochres and was generally the most sought after. It has always been the most important ochre for use in major ceremonies. Adolescent boys are painted in red ochre, preferably using an eagle feather, as part of their initiation. Red ochre was also quite often used to represent the blood of sacred ancestral beings.

It was generally the responsibility of men to dig the ochre from the ochre pits around the country. It was also their responsibility to ensure women of the tribe have enough ochre of all colours for use in women’s ceremonies.

Ochre was also used to decorate ritual objects used in ceremonies and to adorn hunting tools such as spears, shields and boomerangs to preserve them and empower the weapon during use.

Also used as a medicine, ochre was mixed with fat or grease and applied directly as an ointment to an affected area to heal a variety of ailments such as wounds, bruises and swelling. Ochre and eucalyptus leaves were rolled together and used as a medication for head and chest colds. Red ochre was mixed with fat and rubbed into the body as a relief for aching muscles. Interestingly when administering these bush medicines it was often considered important to sing as it was being applied to enhance the healing powers.

In art, ochre is used to paint images that often have symbolic meaning. It is applied (using a twig brush, feathers or fingers) either dry or mixed with water, animal fat or birds’ eggs to bind the pigments together. To make hand stencils seen at some art sites around the country, the ochre is held in the mouth and with a spitting action on the hand held against the wall, the hand outline or even foot outline is created on the wall.

Yet another use of this versatile commodity was in burial ceremonies where it is applied directly onto the body or even scattered over it during the ceremony.

Ochre is not only an important ‘household’ item, but an essential part of life for our early Aboriginal communities.

If you’re dedicated to product research and finding the best fan for any RV, you might know a lot about the features offered by this favourite caravan … END_OF_DOCUMENT_TOKEN_TO_BE_REPLACED 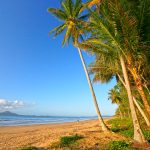 Imagine the longest stretch of golden sand in North Queensland, lapped by the sparkling Coral Sea, fringed by coconut palms and backed by lush … END_OF_DOCUMENT_TOKEN_TO_BE_REPLACED