I wish it were different, but the world of camper trailers is full of “fly-by-nighters” and shonky operators who come and go with impunity, having ripped off their customers. Sellers of cheap and nasty campers not only sting the customer, but they also make it hard for reputable operators to stay in business against a price that can’t be sustained for a quality build. Any guarantee by these crooks is worthless when they are gone.

So it’s refreshing and encouraging to be reviewing one of the stalwarts of the camper trailer industry. Cub is a family owned company and is made in western Sydney, and you can’t get any more Aussie than that. As this 50th anniversary of their foundation shows, they have been around for a long while and have an enviable reputation for quality and durability.

Cub’s history goes back to 1968 when JK Fagan and his son Roger were running a box trailer business and converted one of them into a camper for their own use. When people saw it, they asked for one to be built and things blossomed from there. Over the years countless thousands of Cub Campers have hit the road, and you can still see examples out and about that are decades old.

These days Cub is in the hands of Roger’s son Shane who rose from an apprentice on the floor to become managing director and the third generation of the Fagan family run the company.  And he’s not the only one to stick at the task because in a show of loyalty and stability there are those in the workforce who have been there for over thirty years.

One of the significant points of difference for Cub is their exclusive use of Australian BlueScope steel and high-quality Wax Converters Dynaproof Canvas which is fabricated in-house for all the camper tents. There’s nothing worse than a leaky tent when camping so having a well-built, quality canvas is essential.

Cub has recently rationalised its range, and the Escape on test sits as an off-roader in the higher end of seven models. Boasting one of the largest spaces available amongst its hard floor competitors, the Escape has undergone a makeover this year with new logos and metallic Meteor Grey colour scheme.

Good engineering keeps the tare weight to under a tonne, and unlike a lot of imports you can trust the figure is accurate. The 650kg payload is generous and means you can safely and legally take all the water, camping gear, extra fuel and so on needed for extended travel as a couple or with the family.

In the process of setting up the Escape, it became clear why Cub Campers are so popular. They have been making rear-fold campers since the 70s so design has been perfected over generations to work simply and efficiently. I’ve seen people erecting other various brands who become lost entirely with the process, but the Escape was very straightforward and logical. Everything went together like clockwork, and the tent fitted the frame without blemish or overhangs. Once you have put it together a couple of times, expect a setup time of around 10-15 minutes.

One thing that particularly impressed me was the way the rear fold floor is designed to accommodate various levels of ground and still be flat when the tent is erected. Lifting the rear section is now more sociable on early morning departures with the new silent winch that takes the squeak out of winding and unwinding.

Once the floor was lowered, it was a simple task of raising the rear bow from inside and setting it to its correct height. No need to muck around endlessly adjusting the arms to get the tent to sit correctly, as you do in many campers. The awning can be left connected to the tent on sturdy zips or removed if not required. Setting the awning is probably the longest part of the process, but the various poles and stays are kept to a minimum and are stored in a standard pole carrier under the rear of the camper.

Fitting the horizontal stays is simplified by using Velcro connectors to the main tent, which is both fast and secure and also eliminated the risk of ripping the tent in strong winds. The uprights are fitted with threads that go through the awning eyelets and allow them to be secured with wing nuts – another great idea.

The camper sits on a galvanised chassis and rides on Cub’s own Independent trailing arm suspension with single shock absorbers each side. Wheels are 17” black alloys shod with robust looking 265×65 Goodyear Duratrac Wrangler tyres.  At the A-frame is an Al-Ko off-road ball hitch, a water outlet with a hand pump and a massive toolbox with a near side fridge slide. The far side has a large storage section and the electronics unit, which includes a Projector battery monitor and dc-dc charger, an Anderson plug for solar input, a fuse block and water tank level.

At the nearside front and protected from the weather by the awning are a stainless steel slide-out kitchen including a Smev two-burner cooktop, sink and cutlery drawer while further back is a large pantry on heavy-duty runners.

There are mountains of head height inside and a very solid floor on the lower section that measures 2.55m x 1.9m, making it large enough for extra folding beds or a table and chairs out of the weather. At the front, a full-width step makes it easy to access the raised queen size bed with a medium foam mattress, and I noted reading lights at the bed head and LED strip lighting overhead. Storage options include a locker box with a padded top for an extra seat and the ample space under the bed which is shared by a 100ah battery.

Construction is entirely timber free, so everything in the camper is made from either metal or composite material, so there will be no wood rot in the furniture from anything getting damp, and the structure is strong enough to withstand years of service.

Even fully loaded the Escape will tip the scales at around 1650kg so most mid-range off-roaders will happily tow it. Hitched to the company Prado, it looked a treat, and the Cub’s independent suspension happily soaked up any rough sections of the road.  Its narrow 1.95m width and relatively low 1.74m travel height tuck in behind most vehicles so it will be readily manoeuvrable on narrow bush tracks.

The Escape is a capable off-road camper with loads of room and most of the essentials for getting out in the bush, needing only a fridge and a solar panel to complete the picture.

At $29,990 the Escape isn’t the cheapest camper out there, but one look at the Cub tells you it’s well built and sensibly designed. So with a full off-road five-year warranty on the canvas, as well as the chassis and suspension, the Escape makes a sensible long-term investment. Resale value is high, and the lack of second-hand models in the market suggests owners like to hang on to their campers or, in a lot of cases, pass them on to the family. 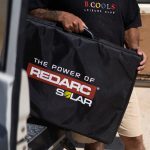 Adding solar to your camping or touring set up is essential if you’re keen to get off-grid and spend more time adventuring. Choosing the right solar … END_OF_DOCUMENT_TOKEN_TO_BE_REPLACED 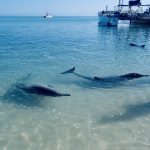