We tour around the ‘other’ gold region of Western Australia

Many travellers exploring the Western Australian goldfields centre themselves around the Kalgoorlie-Coolgardie region, but there is much history to be found a little further afield, as we discovered during our recent road trip through the old gold mining areas of Cue, Sandstone, Gwalia and Menzies.

CUE – “QUEEN OF THE MURCHISON”

Heading up the Great Northern Highway from Perth we camped our first night at Jibberding Nature Reserve just north of Wubin. Arriving in Cue around mid-afternoon the next day we booked into the Cue Tourist Park which is located a convenient short stroll from town.

Located 650 kilometres north-east of Perth, Cue was once a wealthy gold mining town at the centre of the Murchison goldfields and known as the “Queen of the Murchison”. At its peak Cue had a population of around 10,000. There is still mining in the area, although Cue’s population is now only around 280.

A very helpful assistant at the Cue Community and Visitor Centre helped us with maps and information about the area, so that we could set out to explore the next day. We hadn’t stayed in Cue before, though we had passed through many times on our way north, so I was looking forward to exploring properly.

Although the town is named after prospector Tom Cue, gold was first found in Cue on 1st January 1892 by Mick Fitzgerald and his aboriginal companion, Governor. Within days the alluvial patch became the scene of a huge gold rush, coinciding with WA’s gold mining boom. The town grew rapidly and by 1894 thirteen companies operated gold batteries.

Cue’s rich history has been preserved in its magnificent buildings, many constructed from locally quarried stone at the turn of the century. A 2.7 kilometre Town Heritage Walk Trail takes in 13 historical sites, including the Gaol, located at the caravan park, the impressive Government Buildings, Gentleman’s Club, Masonic Lodge, Railway Station and the bandstand Rotunda. The cultural and architectural significance of Cue’s main street, Austin Street, has been recognised by the National Trust of Australia (WA).

A 13 kilometre drive trail includes the Great Fingal Mine Office at Day Dawn mine, built by Italian stonemasons in 1902 (unfortunately you can now only view through a fence because of mining restrictions), and the old hospital ruins. A drive up to the Cue lookout gives you good views over the town.

Further afield, a must see is Walga Rock, 48 kilometres west of Cue on Austin Downs Station. The second largest monolith in Australia, Walga Rock has the largest gallery of Aboriginal rock paintings in the Murchison.  988 motifs have been recorded, including an unusual painting of a sailing ship. Over 300 kilometres from the sea, there is still speculation about its origins. Follow the signage, only a short walk from the parking area, to see the paintings under a shallow overhang. Camping is not permitted, but it is a great place for a picnic, and you can drive along a track around the base of the rock. Please remember this is a site of deep cultural and spiritual significance to the Aboriginals so be respectful when you visit.

Please look out for cattle and wildlife on the roadside when driving through the station. During a good year you can see many wildflower varieties.

On your way to Walga Rock I recommend visiting the abandoned Big Bell town site, 30 kilometres from Cue. Gazetted in 1936, the town rapidly declined after the mine closed in 1955. There is a site map and interpretive signage to help you explore what remains of the town, including the Big Bell Hotel which evidently once boasted the longest bar in Australia.

When we left Cue we travelled south 80 kilometres to Mt Magnet, and then 155 kilometres east to Sandstone. We were now travelling through an area new to us characterised by the red sandstone landscape. Not far along the Mt Magnet-Sandstone Road we saw a magnificent stand of Royal Mulla Mulla –  Ptilotus rotundifolius – which we had never seen before. 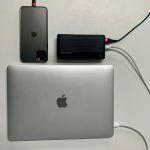 How reliant are you on your mobile phone? When your usage increases, the phone's battery level decreases. A flat phone battery is a genuine … END_OF_DOCUMENT_TOKEN_TO_BE_REPLACED 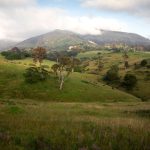 “Below the misty Mt Dromedary, the highest point on the South Coast of New South Wales are two quaint little towns steeped in history and natural … END_OF_DOCUMENT_TOKEN_TO_BE_REPLACED