The picturesque seaside town of Kalbarri sits at the mouth of the Murchison River, 590km north of Perth. It lends its name to a national park that surrounds the town on the east and south – 186,000 hectares of dramatic inland gorges and magnificent coastal scenery that comprise an adventure playground for thousands of tourists and holidaymakers each year. Kalbarri is accessed by excellent sealed roads, as are all major attractions and lookouts within the park.

The unique geology and dramatic landforms of Kalbarri National Park are among its key values and principal attractions. Much of the park’s substrate is composed of deep, horizontally layered Tumblagooda Sandstone, a beautiful red-and-white-banded rock deposited 500 million years ago as multi-coloured sand on the bed of a primordial sea. Over millennia, the relentless processes of weathering and erosion have worked on the rock to create two distinctly different landscapes. The park’s coastal fringe features towering cliffs that plunge more than 100 metres to the Indian Ocean. Ceaseless wind and wave action have exposed the sandstone’s sedimentary layers and sculpted unusual formations in the fragile rock. Inland, the Murchison River has carved a magnificent, meandering 85km gorge through the plateau, exposing the multi-hued rock in spectacular steep-sided cliffs.

At 820km, the Murchison River is the second longest river in Western Australia, with a catchment of 82,000 sq.km (larger than Tasmania). The river starts its journey on the southern slopes of the Robinson Ranges in central Western Australia and is joined by many tributaries on its way to the Indian Ocean. For much of the year the Murchison is just a dry sandy course in the upper reaches with intermittent permanent pools in the long, narrow gorge, below which a sequence of sandbars and shallow pools lead to an estuary that is permanently open to the sea. Following Cyclone Emma in 2006, much of the catchment received 100mm of rainfall, producing the river’s highest recorded flow of 1.8 million megalitres. The river swelled, reaching a width of over 20 kilometres in places, and Kalbarri had to be sandbagged to protect it from floodwaters.

The park lies in the transition zone between a Mediterranean and a semi-arid climate. Winters are warm with moderate rainfall; summers are hot and dry with daytime maxima frequently exceeding 40°C and ten degrees hotter in the river gorges. 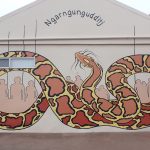 Officially opened in February 2021, the massive Wellington Dam wall mural is a sight not to be missed. The 8,000 square metre mural is thought to be … END_OF_DOCUMENT_TOKEN_TO_BE_REPLACED 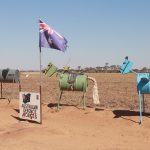 At just 15 km long this outback highway is probably one of the shortest there is, but this is more than made up for with the colour, interest, … END_OF_DOCUMENT_TOKEN_TO_BE_REPLACED