Discovering the wonders of Victoria’s Fairy and Royal Caves

Stepping through the small door, down a dim damp path and into a cool refuge from the summer heat I wondered if I should have brought a cardigan. Below the earth was an underground wonderland of limestone rock formations, trickling water and rim pools, open cathedral-like chambers and intimate alleyways all just waiting to be explored.

Here in the Buchan Caves Reserve in Victoria’s Gippsland region hundreds of caves are scattered. Some in the north of the Reserve are estimated to be 42 million years old. Younger caves in the south are estimated to be between four and five million years old. Two caves are open to the public year-round, and another few are open for private pre-arranged tours. An estimated 120,000 people from around the world visit the Buchan Caves Reserve each year with around 64,000 visiting these particular caves, which is one of the best cave systems in Australia.

The 285-hectare, Heritage Listed Buchan Caves Reserve is conveniently located just outside the town of Buchan and only a four-hour drive east of Melbourne on the Princes Highway. The Reserve is home to a Visitor Centre, kiosk, playground, BBQ facilities and 62 campsites for those travellers who want to stay and explore the region for longer. Both natives and exotic deciduous species make for a unique visual experience in autumn when a kaleidoscope of brilliant reds, oranges and yellows wow visitors. This unique landscaping concept was carefully planned in1929 by pioneering public parks landscaper, Hugh Linaker. Short and longer walks also provide spectacular views across the Buchan Valley. There is even a waterfall to see on one of the walks. But its most famed attractions are the Royal and Fairy Caves.

The Royal Cave was the first stop on our tour of both caves. Our guide first explained the importance of not touching the ancient and precious rock formations inside the cave. Aside from breaking them completely, the oil on our skin can easily transfer onto the rock prohibiting the formation of calcite deposits on the rocks. This will, over time, stop the rock growing. To cure our curiosity, a piece of rock was handed around so we would avoid the temptation to touch the delicate surrounds. It felt just like a regular rock – nothing extraordinary at all – in stark contrast to cave appearances. We could see the rings on the rock – almost like it had been stacked together like Lego pieces – and were told that as a guide, every one centimetre on the rock represents 100 years of growth. Incredibly I was holding a length of rock that was probably around 3,000 years old.

Parks Victoria has got the balance right between protecting the cave’s unique environment and allowing public access to this natural wonder. Carefully placed handrails and pathways provide visitors with a more stable footing. Cool LED lighting has been installed to help reduce the impact and growth of lampenflora, which is a German word meaning “plants of the lamp.” It is a green algae moss that can grow with the heat from lights, and is particularly common in cave environments. Chicken wire helps act as a barrier between people and the low hanging stalactites, but still allows you that superb experience of being so very close to these slow-growing rock wonders.

Inside the cave we get our first glimpse of the stalactites, which hang ‘tight’ from the roof of the cave, and the stalagmites, which use their ‘might’ to push up from the floor. While this isn’t technically correct, it is a simple way to remember the difference between the two rock formations. In reality they are formed as a result of a chemical reaction. Parks Victoria Ranger, Danny Mitton, also a Buchan local, explains the process. “Rainwater, which is slightly acidic, works its way through the limestone dissolving it. Limestone contains calcite and as the water enters the cave on the ceiling the calcite is deposited in a ring about the same diameter as a drop of water and grows down a hollow tube we call straw stalactites.” Stalagmites are formed from the water droplets from above falling onto the floor of the cave. Often the straw stalactites get blocked and start growing outwards forming the more commonly known stalactites.

While the Royal Cave is a little wet underfoot, caused by both rainwater seeping in and surface water from heavy rainfall, it is the larger chambers of the cave that really stimulate the senses. There is Font of the Gods with magically rimmed water pools, and in the foreground a flow stone aptly named Niagara Falls. The scene is magnificent with spindly stalactites and sturdy stalagmites reflected in the soft lighting and still water. Towards the end of the Royal Cave, the grand space of the Princess Royal Chamber opens. It is here that music events have been played and if you’re looking for an unusual and romantic wedding venue, hiring the cave can be arranged. Before you leave this chamber, stand in front of the Temples of Peace, a formation younger children identify as a cupcake complete with a candle on top, for the perfect photo opportunity. Our guide obligingly took happy snaps for everyone.

Just as we’re about to make our way aboveground, our guide pointed out a bone fossil in the clay. It was discovered in 1928 during construction of the exit and has been identified as bone fragments from an extinct variety of kangaroo believed to have roamed the earth more than 20,000 years ago.

After a short break between cave exploring, we wait patiently at the entrance of the Fairy Cave. Our guide arrives and before we enter she explains how both the Royal and Fairy Caves were discovered. On 18 March 1907, local Speleologist Frank Moon was walking in the area and noticed some cool air coming from a small hole in the ground where we now stood. He blasted it open some more, and lowered himself by rope to the cave to discover an elaborate network, now known as the Fairy Cave. A few years later, Moon accompanied Frederick Wilson and Hercules Brown to discover the Royal Cave, which was accessed by a very narrow tunnel from the Fairy Cave. Visitors were able to view the caves in 1907 and 1913 respectively.

The main difference between the Royal and Fairy Caves is the space. While the Royal Cave is mostly open and grand, the Fairy Cave is more confined and narrow with bending under rock formations and through chicken wire tunnels required. Despite the constricted conditions in the cave, visitors are mesmerised by the intimate and detailed view of the rock formations. The suitably named sections of the cave make the experience all the more interesting – especially when the guide warns – “mind your head in Sciatica Alley.”

As we made our way through the Chicken Run – another fittingly named section of the cave where visitors need to navigate a chicken wire tunnel – we made our way to the Kings Chamber. Here our guide pointed out the altar where Frank Moon’s eldest daughter, Fairy – yes, that’s her name – married Frank Hansford in 1930. It is likely to be the only wedding in the Fairy Cave for a very long time. Not long after their marriage, the couple welcomed their first child, and perhaps in a tribute to her father’s discoveries, they named their son, Cave.

We moved on through Sciatica Alley underneath a maze of rock formations, and as we re-group at a corner in the path our guide keeps us in suspense before illuminating what is known as Ivory Palace. Technically this formation is called a Column, which is the joining of a stalactite and a stalagmite. This thick pillar-like structure was near invisible as we turned the corner, and without the light we would have missed its grandeur.

Further along the path, we are shown a very small amount of Buchan Black Marble, which was mined in the area from 1860 and has been used in various significant buildings in Australia and overseas. The best place to see Buchan Black Marble in all its glory is at Melbourne’s Shrine of Remembrance. All 16 columns in the inner sanctum of the memorial are comprised of Buchan Marble. Another example is the balustrade on the staircase in Victoria’s State Library, which is visible from the Swanston Street entry. During the First World War, 900 tonnes of marble were shipped to London to be used in the building of Australia House. Danny recites an interesting fact about its journey “this first shipment was sunk by a German submarine.” The second shipment thankfully did not suffer the same fate.

It was just a short distance further into the Fairy Cave’s final chamber. Before reaching our last stop we paused briefly and looked in amazement at the original tiny access point where explorers Wilson, Brown and Moon squeezed through on their way to discover the Royal Cave. Reaching the Blackwood Chamber the disparity between the many tight confines of the Fairy Cave was on show. Here you could gaze upwards into eternity marveling at the various rock formations, or speleothems for the technical term, hanging from the above. There are solid stalagmites, columns, straws, stalactites, and towel-like creations, often referred to as blankets or shawls, to be seen everywhere. Thankfully our group was able to spread out a little to explore from various angles.

The Blackwood Chamber is also where disabled access is afforded to those confined to a wheelchair, unable to walk, or unsteady on their feet, giving them the opportunity to ride a stair-climber wheelchair into this final chamber of the Fairy Cave system. To use this cave access, pre-arranged bookings are essential.

The Royal and Fairy Caves are part of the same cave network, which were formed by an underground water system cutting through the limestone rock. Each cave provides 500 metres of exploring and at the deepest part you are 65 metres below the ground. In its entirety, the cave network stretches approximately three kilometres and waters running through the network spill into a man-made swimming pool in the Buchan Caves Reserve. The pool is open during summer and the water is a cool 17 degrees – the same temperature inside the cave.

That’s right – inside the caves is a pleasant 17 degrees – year-round! Danny explains all cave systems have a relatively stable temperature, which is based on the average outside ambient temperature. “You will find that caves in Tasmania are slightly cooler and caves in Queensland will be slightly warmer given their outside climate,” he details. So, my initial fear of being chilly on our cave tour was misguided and my cardigan was certainly not required. 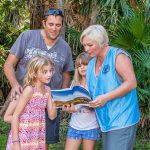 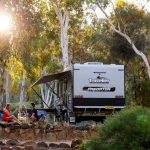