It’s hard to imagine a more inhospitable place to have lived a life, as you walk across the concrete hard dirt and gibber stone cemetery, a dust storm whipped up by a hot northerly wind, drying your throat with each dust coated breath. But people did live here in the town of Farina in far north South Australia. They worked and raised families here for more than 80 years from its establishment in 1878 to when the last resident left in the late 1960s.  This could be the story of another abandoned town, abandoned dreams of early settlers but the history and spirit of Farina is living on thanks to a restoration group and hospitable station owners.

Farina was established in 1878 as a rail head town in South Australia but an abundance of water noticed when the area was surveyed in 1876 was actually due to some recent flooding and gave the false impression of being a suitable area for wheat growing. The area was originally called Government Gums but was later given the name Farina, the Latin word for flour.

The first settlers erected a tent city to begin with, and eventually the township grew to include two hotels, a bush nursing hospital, two churches, a police station, underground bakery, and a store which provided everything from clothing and saddlery, to tools and provisions including beer and rum. At its peak, Farina had a population of over 300, a school, a boarding house and it became a resting place for shearers and drovers moving through the area.

It was also a town where Afghan camel drivers lived as they made a living bringing in wool from surrounding stations and delivering supplies to them. Other residents that lived in this harsh environment included Chinese construction workers who worked on the railway. When the rail extended to the town of Marree and then Alice Springs and was eventually moved west of its original site, the town gradually died out.

The first organized restoration work on the ruins began in 2009 and the Farina Restoration Group was formed, with volunteers continuing with earlier stabilization work that had been started. Organised work programs have been held every year since with volunteers spending a few months on projects from May to July each year.

To get to Farina today it’s a much easier prospect on a bitumen highway, with the turn off to Farina station around 24 kilometres north of Lyndhurst and approximately 650 kilometres north of Adelaide on The Outback Highway. The first question on most people’s minds would be why would you want to go there, but now having experienced it for myself I can see the attraction. In normal times Farina would be a hive of activity when the volunteers are onsite and during this time the unique underground bakery produces bread from the wood fired Scotch oven, for the travellers who descend on the region to buy. Funds raised from bakery products are put back into the preservation projects and provide more interpretive signage for visitors to learn about the history of the town.

To visit outside of this time though is still very special, with fewer people giving the town more of a ghostly feel. Despite my first impressions, the campground area is very welcoming with plenty of space for campers and caravanners and at only $5 per head, per night it’s worth staying a few days to really appreciate the surroundings.  A drive around the town is a great way to get your bearings to start with, but it’s easy to wander the streets of the town on foot, reading the signage along the way to establish what each ruin once was.

Apart from the residence and sheds of the current station owners, Kevin and Anne Dawes, there is one new building which sits on the site where an original station operator’s homestead once stood. The new building is sympathetic to the original homestead’s façade and will be officially opened this year. It will house a visitor reception centre, museum, education facility, a bakery training kitchen and café seating. By far though it’s the magnificent ruins that dominate the desert like landscape and it’s quite an experience to feel the history as you wander amongst them.

You have to be self-sufficient when staying at Farina and if your caravan has its own ensuite all the better, but there are flushing toilets and showers that are heated with a donkey heater to wash off the dust, if you don’t have your own. Make sure to bring firewood too so that you can enjoy a campfire under the multitude of stars to be seen every night in the dark outback sky.

Farina is definitely a surprise package and one unique destination to put on your outback South Australian itinerary.

Farina is around 650 kilometres north of Adelaide on The Outback Highway. The old township and campground is open every day of the year for travellers to visit and stay. The Farina Restoration Group volunteers are usually on site from May to July each year.

An organized Anzac Day dawn service is held at the Farina war memorial every second year with the next planned for April 2021. The Farina bakery operates from May to July each year.

Events planned and information on volunteering can be found on the Farina Restoration Group website: farinarestoration.com 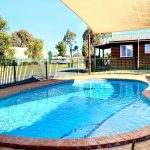 It’s time to breathe the fresh air and feel the sunshine on your face. Visit Holbrook (just off the Hume Highway) on your next adventure and enjoy all … END_OF_DOCUMENT_TOKEN_TO_BE_REPLACED